Louis Blèriot designed and built the original Blèriot Type XI, which was the first heavier-than-air craft to be flown across the English Channel. Blèriot flew the 25 miles from Calais, France to Dover, England on July 25, 1909 and won The Daily Mail prize of £1,000. After conquering the English Channel, the Blériot XI became one of the most popular airplanes in the world. When blueprints were published in 1912, the Blèriot also became one of the most copied aeroplane designs. Unlike the Wright B and the Curtiss Jenny, the Blèriot features a monoplane (one set of wings) configuration. By showing the viability of his one wing design, Blèriot encouraged other builders to follow in his footsteps. Today's airplanes share the same basic design as Blèriot's creation.

In an effort to sell Blèriots to the U.S. Army, the Moisant Company sent Bernetta Miller to showcase the aeroplane's capabilities to officials at the field. The Army was not convinced of the monoplane's safety, and it opted not to purchase any Blèriots. When the National Aeroplane Company established operations at College Park Airport, it became the authorized agent for the manufacture and sale of Blèriot aircraft in the Washington, DC region. 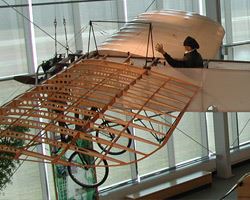 Completed in 2002, this reproduction Blèriot XI monoplane was built in the College Park Aviation Museum's own restoration shop. It was crafted by volunteers under the direction of restoration shop manager John Liebl, from the 1912 drawings originally published by John Rozendaal.
/QuickLinks.aspx