The "Cub" was a common sight at general aviation airports throughout the 1930s, 40s and 50s. The Cub was designed by Clarence Gilbert (C.G.) Taylor in Bradford, Pennsylvania. He first founded Taylor Brothers Aircraft Corporation in Rochester, New York with his brother, Gordon, in 1926. After Gordon's death in a 1928 plane crash, Taylor moved to Bradford and opened Taylor Aircraft with the support of the community and local investors. C.G. then designed the Taylor J-2 Cub to be a stable, easy-to-fly light airplane. Unfortunately, the Great Depression forced Taylor's company into bankruptcy in 1930. 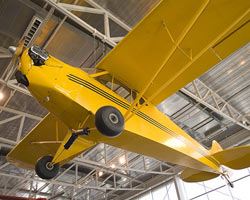 William Piper, an oilman living in Bradford, bought the company for $761, but kept C.G. Taylor as the company's president. After series of design disagreements between Piper and Taylor, William Piper bought out C.G. Taylor in 1935. Piper changed the name of the company to the Piper Aircraft Corporation while C.G. Taylor moved to Ohio to start a new aircraft company. Despite the name change, the Piper J-3 was substantially the same as the Taylor J-2 and continued to be nicknamed the "Cub."

Piper's Cub became an enormously popular civilian aircraft; more pilots learned to fly in the Cub than in any other airplane. At College Park, George Brinckerhoff used the planes for flight instruction for 30 years. The Cub in the museum's main gallery was one of the 1,547 Cubs manufactured by the Taylor Aircraft Company. However, by the time Piper Cub production ended in 1947, William Piper oversaw the manufacture and sale of 19,888 Piper Cubs.

NC16769 (serial no. 771) is on loan to the College Park Aviation Museum from the late Tom Hillier of Escalon, California.