After Clarence Gilbert (C.G.) Taylor was ousted from the Taylor Aircraft by William Piper in 1935, C.G. Taylor founded a new aircraft company in Ohio. The mission of the Taylor Aircraft Company (later renamed the Taylorcraft Aviation Corporation) was to build a better small plane than the renamed Piper J-3 Cub. The BL-65 was part of C.G. Taylor's goal to outperform the Cub. It was called the BL-65 because it was the second model the company produced (the first was the A) and it had a Lycoming 65hp engine. Although the Cub and the Taylorcraft look very similar, there are some differences. 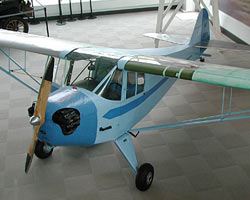 Both airplanes have seats for 2 people, but in the Cub the passenger sits behind the pilot, while they sit side-by-side in the Taylorcraft. Additionally, Cub pilots used the standard control stick to fly the plane while Taylor used the then new idea of a control wheel, like a car's steering wheel, for aileron and elevator control. In the air, the two aircraft performed very similarly. Despite the similarities, more than twice as many Cubs were produced than Taylorcrafts.

Visitors are encouraged to touch, explore, and sit in the cockpit of the Taylorcraft. Aspiring pilots can operate the controls to move the elevator, rudder and ailerons. One wing has been left in various stages of completion, to illustrate the process of covering a wing with fabric.