The Ottery Group and Community Planning Division staff presented the nomination to the town council and stakeholders on Thursday, January 23 at 6:00 p.m. at the Cheverly Town Hall gymnasium, 6401 Forest Road, Cheverly, MD 20785.

It is now proposed to revise/amend the finished (but not yet listed) Cheverly National Register Historic District nomination to include additional land and resources. Specifically, it is proposed that additional survey and research be undertaken with the purpose of expanding the nomination to include properties located within Cheverly Sections 1 through 11, and the adjacent and nearby subdivisions of Cheverly Forest, West Cheverly, and Dickey’s Addition to Englewood. The proposed revision would include a survey of the subdivisions that were platted between 1927 and 1940 and that maps and aerial photographs indicate were substantially developed by approximately 1950, which the current nomination provides as the end of the district’s period of significance. The revised nomination would include contributing resources in these subdivisions (but not necessarily incorporate the entire subdivision, some of which include streets of dwellings from the 1970s and 1980s). It is also possible the period of significance could be extended to 1955 or even 1960. The extent of the expanded nomination will be based on a careful analysis of the additional land and resources surveyed.

The Prince George’s County Planning Board will review the request to expand the nomination at its meeting of April 2, 2020. The meeting will be held in the County Administration Building’s Hearing Room. Click here for a link to the board’s agenda.

Nominate the historic core of the Town of Cheverly to the National Register of Historic Places to achieve recognition of its historic significance, enabling the use of state and federal tax incentives for the preservation and rehabilitation of contributing properties.

This project involves the retention of consultant services to research, document, and produce a National Register Historic District Nomination for those portions of the Town of Cheverly that would be found to meet the criteria for designation as a National Register Historic District. The initial area that was addressed through this project included the area identified as the Cheverly Historic Community in the 2010 Approved Historic Sites and Districts Plan (pp. 223-224) and is composed largely of those portions of the present Town of Cheverly that were platted by Robert Marshall, president of the Washington Suburban Realty Company, in seven sections between 1918 and 1926. The consultant services produced all the documentation required for review by the Prince George’s County Historic Preservation Commission Prince George’s County Historic Preservation Commission, the Maryland Historical Trust, and the United States Department of the Interior/National Park Service.

The expanded nomination would include sections 8 through 11, and the adjacent and nearby subdivisions of Cheverly Forest, West Cheverly, and Dickey’s Addition to Englewood. 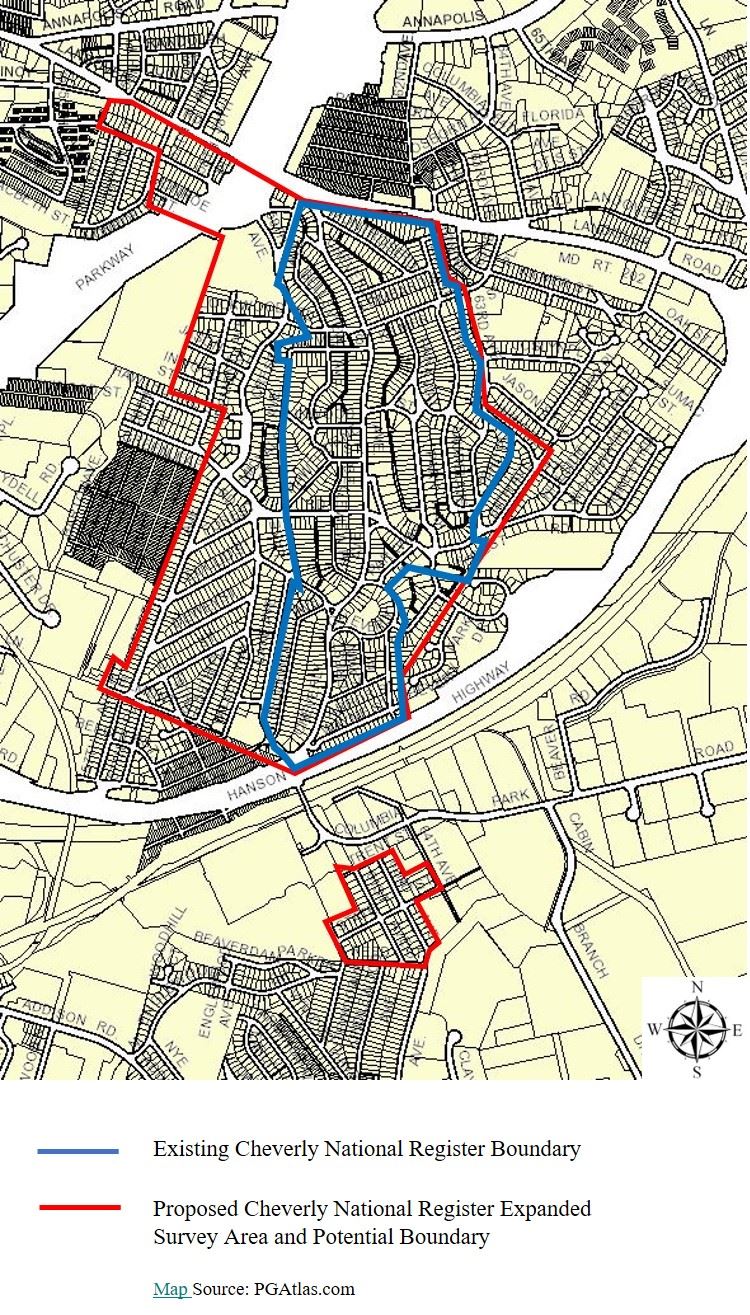