The annual Beltway Barbeque (BBQ) Showdown contest highlights the art of barbecuing in Prince George's County and the Mid-Atlantic region. This BBQ Showdown is nationally sanctioned by the Kansas City Barbeque Society (KCBS) and draws teams from the Mid-Atlantic area. Every year, thousands of people celebrate and enjoy the art, music, and history of BBQ in Prince George's County, Maryland. The Beltway BBQ Showdown offers a tremendous number of fun activities for the entire family. The competition has returned to The Prince George's Equestrian Center - Show Place Arena in Upper Marlboro, Maryland.

This Maryland BBQ festival offers live music, a Classic Car Show, food and craft vendors, and children's area full of fun things to do. Favorite events occur under the Tasting Tent such as grilling demonstrations, the finger licking "Buck-A-Bone" ribs cooked by the competition, and the popular “People’s Choice” BBQ Sauce Boss contest which has 3 samples for $1.

In 2007, the Governor of Maryland issued a proclamation classifying The Beltway BBQ Showdown as a Maryland State BBQ Championship. This status allows the Grand Champion of the contest to attend the "American Royal" in Kansas City, Missouri. 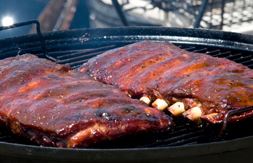